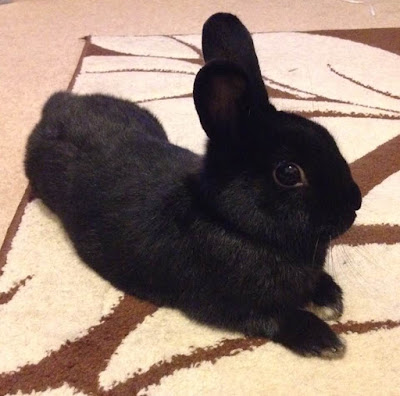 After loosing my dog to a mystery illness, I was left heart broken and pining for another pet, he was my saviour. We discussed what pet we might like and decided on a bearded dragon. Although I came across a rescue centre online that mainly had rabbits and guinea pigs and decided I would go and have a look, just for some free cuddles and there was a lovely lady bunny that I loved the look of, baring in mind I knew nothing about rabbits or guinea pigs!
Turning into a house at the top of a road, we were taken around the back where there was a couple of sheds, some with hutches in, others were the hutch. We took at look at the female that I had my eye on, but we weren't allowed to interact with her as she was in the middle of a phantom pregnancy and very grumpy. I was taken to the guinea pig shed and told to hold out my arms, whilst she opened up a hutch, this was when black bunny was placed into my arms, he just sat there and snuggled in, I was told how to support his bottom whilst holding him and she explained his story.
This bunny had no name, he came in with his brother, not long after he was born, they fought so were separated and his brother went off to his new home. They were in the rescue for around 6 months, as no one wanted a black bunny. So the rescue took it upon themselves to bring him indoors every evening whilst they watched the soaps, to give him lots of love and cuddles.
We left the rescue and took a visit to Pets at Home to check prices of hutches and items, not intending to get one there are then, but I couldn't get the little lonely bunny out of my head and we bought a carrier and supplies after phoning the rescue and headed back to collect him!

They were delighted bunny had a home and even a name, I chose the name Marvin on the way to collect him. 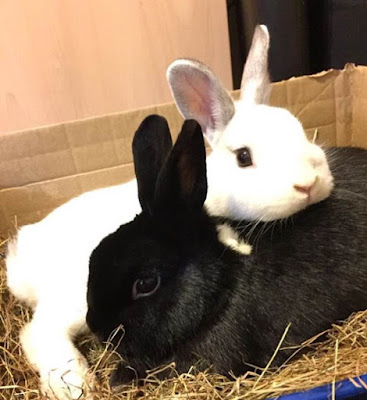 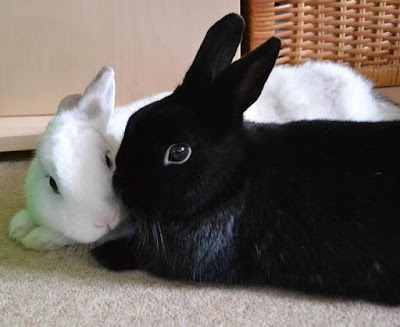 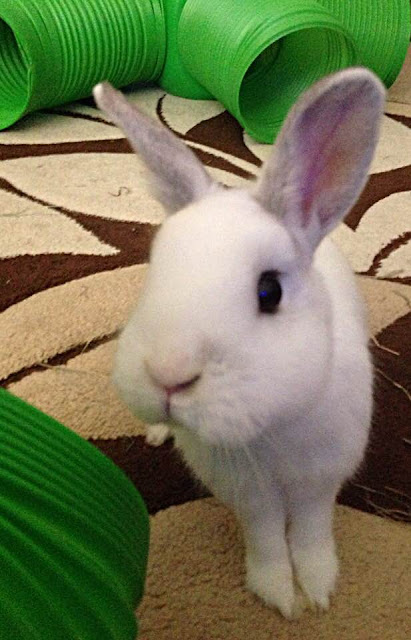 The rescue didn't usually rehome single bunnies, but they agreed if we gave him enough attention and time then he would be okay. We adored him and spent most of our spare time with him, giving him lots of love, hugs and cuddles which he seemed to enjoy, whilst we were learning about rabbits, he taught us a lot of things.
Until one day he went absolutely crazy, buzzing around my friend, we didn't know what was wrong, although she had a unspayed female at home, he could smell her and was flinging poop all around the room.
My friend left and he was still acting very strange, my partner and I were sat watching television, when he jumped up on our laps, climbed the back of the sofa and sprayed us both in the face! This was not a pleasant experience and he was booked straight in for neutering.
He lived with us for around 16 months as a lone bunny, he seemed content. As I was researching bunnies I kept coming across that rabbits should ideally be in pairs or groups, I thought my boy was okay... seeing other bunnies with their partners made me think it really wasn't fair on him and decided to research how to go about getting another rabbit, when a single female appeared on the same rescue's website. She was crossed with a dwarf and was rather small compared to the other bunnies at the rescue, so they were looking for her to have a small husbun, she was spayed and ready for her new home. Marvin was a Netherland dwarf cross too and was fairly small, so we took him back to the rescue to meet this little lady.
They placed the white bunny, then called Charlie, in a small run and asked us to place Marvin in with her.... they did nothing! no reaction. We waited for around 10 minutes whilst they just sat there, then suddenly Marvin started humping her and her head. We weren't sure what to think, what was my baby doing?! Apparently it was normal and was to help work out who was in charge, as long as they were not biting and fighting the rescue lady didn't seem too bothered.
We stood chatting and watching them, whilst there was a lot of ignoring and a small amount of humping from the bunnies. They said that the meeting was very successful and they wouldn't usually expect bunnies to be so calm on their first meeting, we signed the paperwork and was given the okay to take them both home after an hour or so of them being together, they sat side by side in the carrier and we took them home.
We spent the day on bunny watch, seeing how they interacted with each other and within hours they were snuggled up together, so they went to bed together that night and have been together ever since.
We were so lucky with this bonding, I'm so glad we decided to check her out, Charlie became Suki and we had a bonded pair, Marvin and Suki.
There is nothing like another bunny friend and I feel guilty for not doing it sooner for him, but years later they are still going strong together.
Posted by Dannii at 00:00