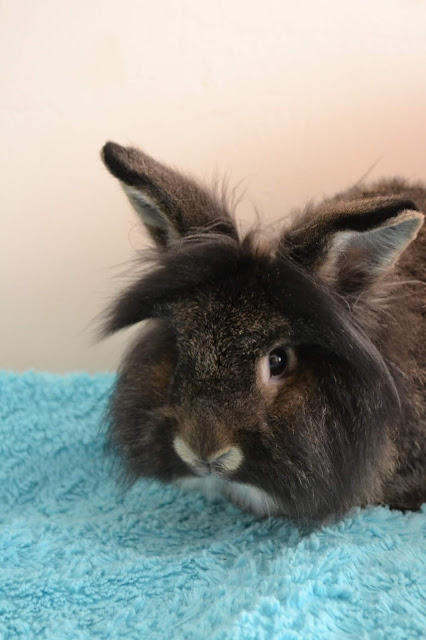 Lincoln came to us after we saw a Facebook advert where the lady had adopted him from Pets at Home, just a week before, he was living in a rat cage with just a bottle of water and a bowl of food. The lady said she was moving and unable to take him with her, we only went to visit him, to have a look, but I fell in love instantly, especially seeing what he was living in. He came home with us that night and settled in straight away, we supplied him with plenty of hay and water and reduced the amount of pellets, we also gave him a name which he didn't have before!
We decided on the name Lincoln after we explored some names and I texted a couple of photos to my family to show off the new addition, he had a long grey beard and one of the name suggestions was Abraham Lincoln, instantly I loved the name Lincoln and thought it suited him perfectly.
We later got him neutered and waited 6-8 weeks before thinking about bonding him with our other two rabbits (which I will introduce later on) The boys didn't get on very well to begin with, we even tried taking the three for a car ride to help with the bonding process, but it was slow going, so they all lived next to each other for a month before we bonded the three together.
Lincoln started loosing weight as the other bonded pair would get to the food before him, so we took the decision to remove him from those two and get him his own friend, once a potential lady became available. 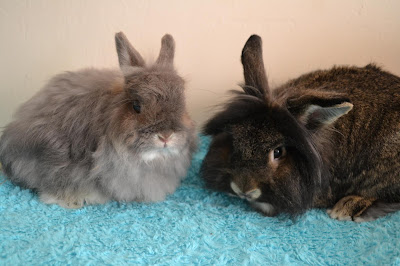 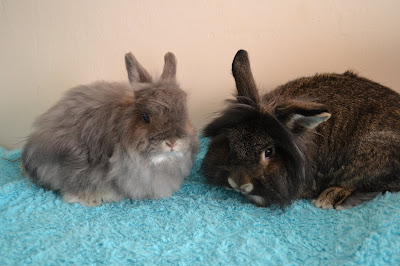 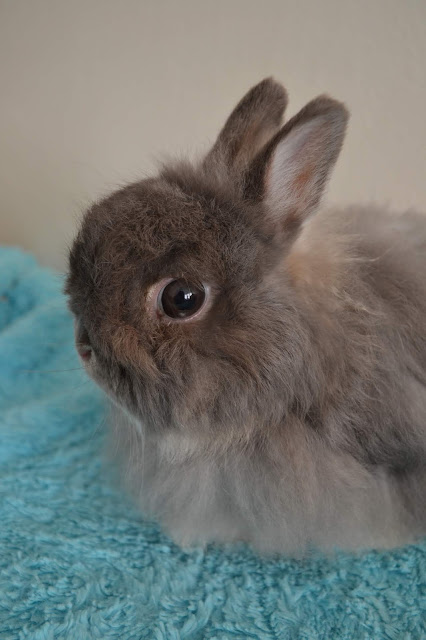 Not long after Lincoln, this little lady became available via Facebook, there wasn't many photos of her, one of her hiding under a blanket, another of her hidden beneath the previous owner's lap. So we didn't really know what this lady looked like and only knew her name was Fluffy, they originally wanted a large payment for her, but I messaged them and told them that she would have a great home with us, sent them photos and didn't think anything of it, not expecting a response.
A few hours later they messaged me to arrange collection.
On arrival, the lady bought her to the door, whilst brushing her, took me through to where she was staying, she was downsizing her animals as she was renting a room from someone with her partner. We discussed Fluffy's situation of her being spayed, runny eyes and her matted coat and after a quick cuddle, she came home in the carrier with us.
Fluffy was living in our lounge for awhile and Lincoln would come out for a playtime when she was in her cage, we did this for a couple of nights and they seemed to show good signs of bonding, where they would explore each other through the bars, ignore each other and lay down next to each other, no aggression or annoyance.
One night we thought we would let them out together with supervision and see where it led. It was pretty much an instant bond, hardly any humping, no nipping and they just snuggled up together. So we kept an eye on them and decided we would let them stay the night together.
In the morning they continued with their good behaviour, seemed inseparable and have been together ever since.
She does a great job of grooming Lincoln and his beautiful mane, which as Lincoln has grown older has turned brown and shortened. Unfortunately he has a hard time grooming her as she is long haired, when she arrived with us she was severely matted and we had to cut most of her fur off, with regular brushing and help from Lincoln we can manage her long locks.
We discussed new names for her, wrote down our ideas and we swapped lists and circled any we liked, Lexi came out top and works beautifully we think with Lincoln's name. The perfect pair.
Posted by Dannii at 02:00