The Importance of Hay

A rabbit's diet should be at least 80% of hay, they should eat at least their own body size in hay a day.
Rabbit's need constant access to hay to snack on throughout the day and night, this is to help keep the gut moving and to stop any blockages of fur or other things ingested. The long fibres help keep the muscles in the stomach stay strong.
Rabbits have 28 teeth and they are continuously growing, they grow around 12cm a year, hay helps grind these teeth down and stop them growing into the side of their face and cause abscesses. 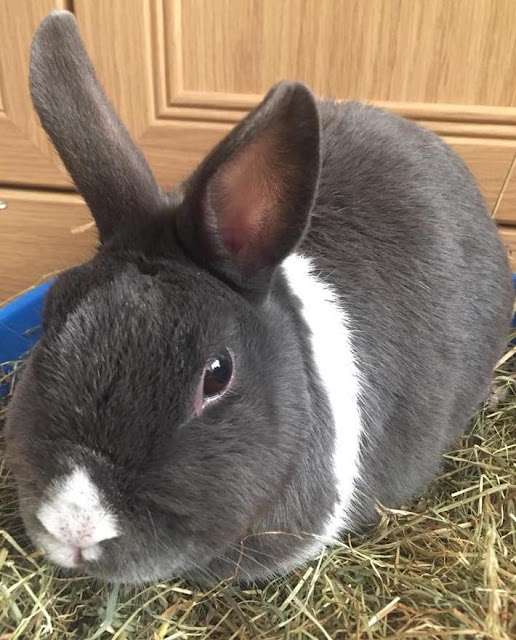 After a few messages back and forth, I was speaking to a lovely lady who was looking after her daughter's rabbit, after her daughter moved out and was unable to carry on caring for him. He was around 5-6 years old, known to be in good health and hadn't had any of his vaccines or been neutered. We arranged for her to drop him off with some of his food and we'd plan on getting him neutered, if it was advisable due to his age, have both his vaccines and pair him up with a female bunny.

I was passed a cardboard box where this little bunny was sitting hunched up inside. I gently lifted him out, gave him a big cuddle and placed him down on the floor, where he ran to the litter tray full of hay and sat there peacefully.

After speaking to the lady more and observing the bunny I asked if he had had his teeth checked recently and she said 'why do you think there is something wrong with his teeth?' I stated that I ask these questions for most of the bunnies that were handed over and I was being more cautious as this bunny was stated not to of eaten hay for over 5 years.

Once the lady had left, bunny, now named Murphy, picked up some hay and kept spitting it out, I offered him some of his food which he seemed disinterested in and some treats. We would normally let a bunny settle in before we did anything for them, but we noticed some very overgrown nails and they had to be cut straight away for his own comfort.
Whilst trimming his nails I noticed his two front paws - one looked deformed without any hair on and the other was missing some hair, looked sore and had yellow fur around it.
An hour went by, he hadn't moved, drank, eaten or shown any interest in anything, his paws were sore to touch and I had a bad feeling about it all, so I rang the vets immediately. They managed to book him in for that evening.

It is always better to phone the vets if you are worried about a bunny's health as they can go down hill very quickly, especially with new rabbits, although sometimes it takes awhile for them to settle in, so they might not be in the greatest spirits, but even if you just book your new rabbit in for a general health check!

Whilst we were waiting for the veterinary appointment time to come closer, Murphy would sit grinding his teeth, so loudly, every ten minutes or so, still wouldn't eat or drink. This was very concerning and I was so grateful for the later appointment, I just wish it came sooner.

We arrived at the vets, they weighed him, checked his body condition, checked his ears and teeth. We explained our concerns and explained our plan for neutering and finding him a lady friend, which they completely agreed with but told us before he would have surgery for the neuter, that he would have to get better first.
The deformed bare foot and the balding yellow foot was burns from where he had been drooling, a life without hay had badly done damage to his teeth and now his paws, the vet prescribed him some gut stimulate, antibiotics and pain relief to try and encourage him to eat and poop, as a bunny with gut stasis isn't a good bunny to operate on and he would have to go back in the morning for an operation on his teeth.

After a night of him still grinding his teeth, we kept him indoors near our room so we could hear him. We heard nothing through the night, he hadn't even moved from where we placed him by the looks of it. Nothing was eaten, still no poop, but the vets decided he needed his teeth looking at or he may never eat again.

After a long afternoon of waiting for him to come out of surgery I received a phone call, 'Hello I'm calling about Murphy, we did all we could with his teeth, the operation was going well, we managed to complete the operation, but unfortunately he didn't wake up, I'm so very sorry.'

We did all we could for him, I loved him so very much in the small amount of time of knowing him. The dreaded collection of the body had to happen though, so we went to collect him right away.
We spoke to the vet further and they said it was the life without hay that left him malnourished and with bad teeth, his teeth were the worst they had ever seen at the surgery, they even photographed it to show us. Most of his teeth were rotten, rotting or had already fallen out, he had some growing into the side of his face, which was the ones they had to remove, this was causing him all the pain.
Murphy had woken up for a few minutes after the operation but he was too poorly to carry on and his body just gave up.


How to get your bunny to eat hay 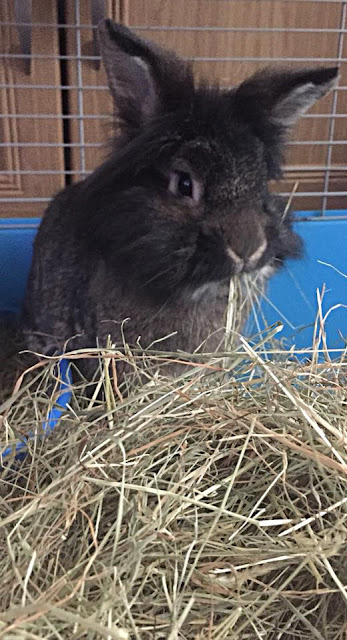 If your bunny won't eat hay there is lots you can do and try. There are a large variety of different hay available, the most popular being Timothy hay which also comes in lots of different brands and from different places, all tasting differently and of a different quality. So just because you've tried one type of Timothy hay, doesn't mean your bunny won't like a different brand. The greener more stalker hay is the best. There are other types such as meadow hay, oat hay and alfalfa hay but alfalfa hay should be limited for adult buns as it can be quite fattening.

There is also a large variety of hay that contain different mixes, from dandelion mixes to marigold mixes, apple mixes to carrot mixes, they aren't good all of the time but to help encourage them to eat hay and they are a fantastic treat.

Cutting down on pellets can help encourage them to eat more hay, after all an adult rabbit over the age of 6 months, only needs a tablespoon of pellets per kilo gram of rabbit per day.

Put hay above or in their litter tray, rabbits love to eat and poop at the same time, this will help encourage them.

Mix hay with grass and herbs this will encourage them to eat more.

Hay cookies are available to help them get used to eating hay, but only give 1 or 2 a day.

Try rubbing some hay around their mouth, sometimes this encourages them to bite it and find out that they actually like it.

Make toys out of cardboard tubes stuffing them with hay and herbs. 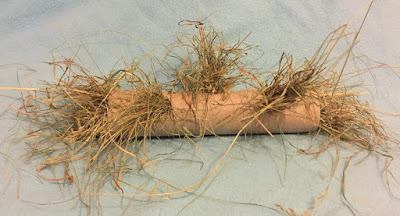