It is important to regularly check your rabbit's poops as they are a great indication of a rabbit's diet and health.
Rabbits produce two types of poo, fecal pellets and cecotrophes.

Rabbit fecal pellets - they should be rounded, uniform in size, dark brown to golden colour, no liquid and barely with any odour. These are mainly made up of undigested food, hay and grass, you're likely to see these in the wild and they are known as the 'regular' bunny poops. Rabbits should produce 200-300 of these poops daily, per rabbit, they shouldn't be too hard and crumble when squeezed. 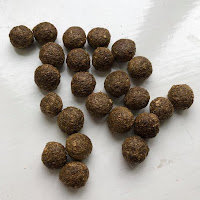 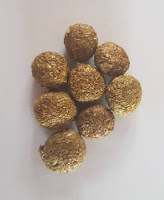 Cecotrophes, also called caecrotrophes, cecal or night faeces - these are dark, grape like, can be smelly, mushy with a thin layer of mucus. These are usually eaten straight from a rabbit's bottom, you'll often see a rabbit cleaning themselves and then munching on something, it is likely that they are eating their cecotrophes. They are also known as night faeces as they like to do it in private, usually in the night time, although they can eat them any time of day.
Cecotrophes are important to eat as they are made up of nutrients from their food that has been passed through their caecum / appendix, fermented and released for their consumption.

Small dark irregular poop can be a sign of a slow gut and possible gut statis, it can also happen through stress and other illness, so it is important to keep an eye on your rabbit's poop and if this is happening make sure they are eating enough hay, moving around enough. These poops can also be a sign of dehydration and a result of medication. If they aren't eating then you'll need to see a vet immediately. 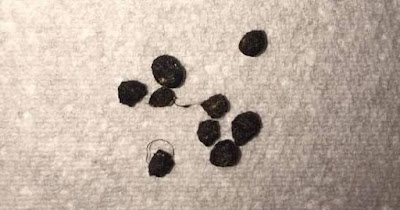 Picture thanks to Sarah A Sims

Small dark long poops can be a sign of ingested hair, dehydration, lack of fibre and a result of medication, so make sure your bunny is moving, getting enough water and hay.

Connected / linked poop trails can be a result of ingested hair or carpet, as rabbits cannot vomit their hair is passed through their intestines and appear as connected poops. The best way to ensure your bunny doesn't ingest too much hair is to regularly brush them and make sure they are eating a good amount of hay to keep it passing through if they do ingest some.

Loose poop is usually a result of too much fruit or veg or they have eaten something that doesn't agree with them, it can also be a sign of other illnesses, to treat a runny bottom you can wipe your bunny with unscented, non-alcohol wipes and feed only hay for 24 hours and see if it improves, if no improvement at all or it gets worse, you'll need to see a vet immediately.

Diarrhoea, true diarrhoea in bunnies is very rare and is usually a sign that you need to seek a veterinary's opinion immediately and take a stool sample with you, it is often a sign of illness, poison or parasites. In young rabbits it can be a sign that a kit has been weaned too early.